Last fall Larry Calof and I went down to Monument Valley.  We made arrangements with Tom Phillip’s guide company to camp the night on Hunt’s Mesa.  It’s a long, bumpy drive up there.  Last time I went I hiked up and back.  We were a bit concerned that the weather would prove too cloudy like the last time we were there, but a small snow squall passed quickly and left us with some very nice light. We shot till nearly dark.  Had dinner fixed by the guides and then hit the sack.  We were up early for sunrise and were again rewarded with good light and a nice sky.  We had a quick breakfast and then drove back down to the Visitor’s Center.  After a relaxing lunch we met our guide for our afternoon Photo Tour.  We spent most of the time in Mystery Valley and then made it over to the Teardrop for sunset.  Overall a very nice trip.  We had friends that were on Hunt’s Mesa the next night who only had clear skies.  What a difference a day makes.  Here’s one of the sunset shots I took on Hunt’s Mesa. 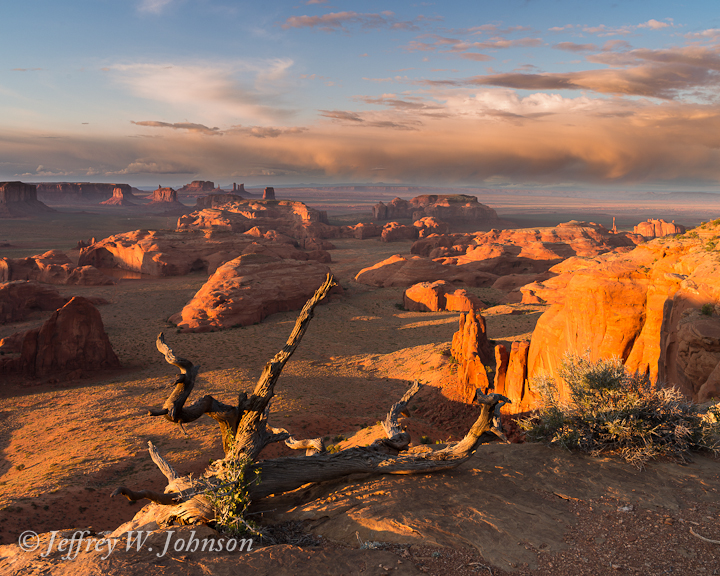 The rest of the images are in the image catalog at Monument Valley Oct 2011.  I hope you enjoy them.

On a sad note, Tom Phillips passed away earlier this year.  I assume his family will keep running the guide business as they’ve been doing most of the work the last few years.

If you’ve tried to get on the web site in the last week and haven’t been able to here’s the reason. I’m working on a major overhaul of the web site. The first step in the process required backing up and shutting down the web site for a short time while the web server was being upgraded. As part of that I had to backup the database that ran the blog (What’s New section). Apparently something went wrong with that process which left the What’s New section unavailable for a few days. I had decided to upgrade the blog software to WordPress from B2Evolution anyway. I ended up copying as much as I could from each blog entry from the old database and using that to recreate the posts in the new blog. I finished that process last night and it looks like everything is up and running.  Now I can get caught up with three or four trips I have not posted about yet.

The first trip I need to post about is from over a year ago.  I went to Moab in June 2011 with my friends Gus and Gary.  This time we took our wives and stayed at a very nice inn called “Sunflower Hill Inn”.  It’s a bit more pricey, but the girls (and us) enjoyed it.  We had wanted to get down in May and catch some wild flowers, but it just didn’t work out with my Africa trip in April and May.  We had a good time and managed to get a few good pics.  Here’s one of the Newspaper Rock petroglyphs on the way into the Needles District of Canyonlands National Park.

The remainder of the photos from that trip are in the Image Catalog under Moab June 2011. As always, I hope you enjoy them.